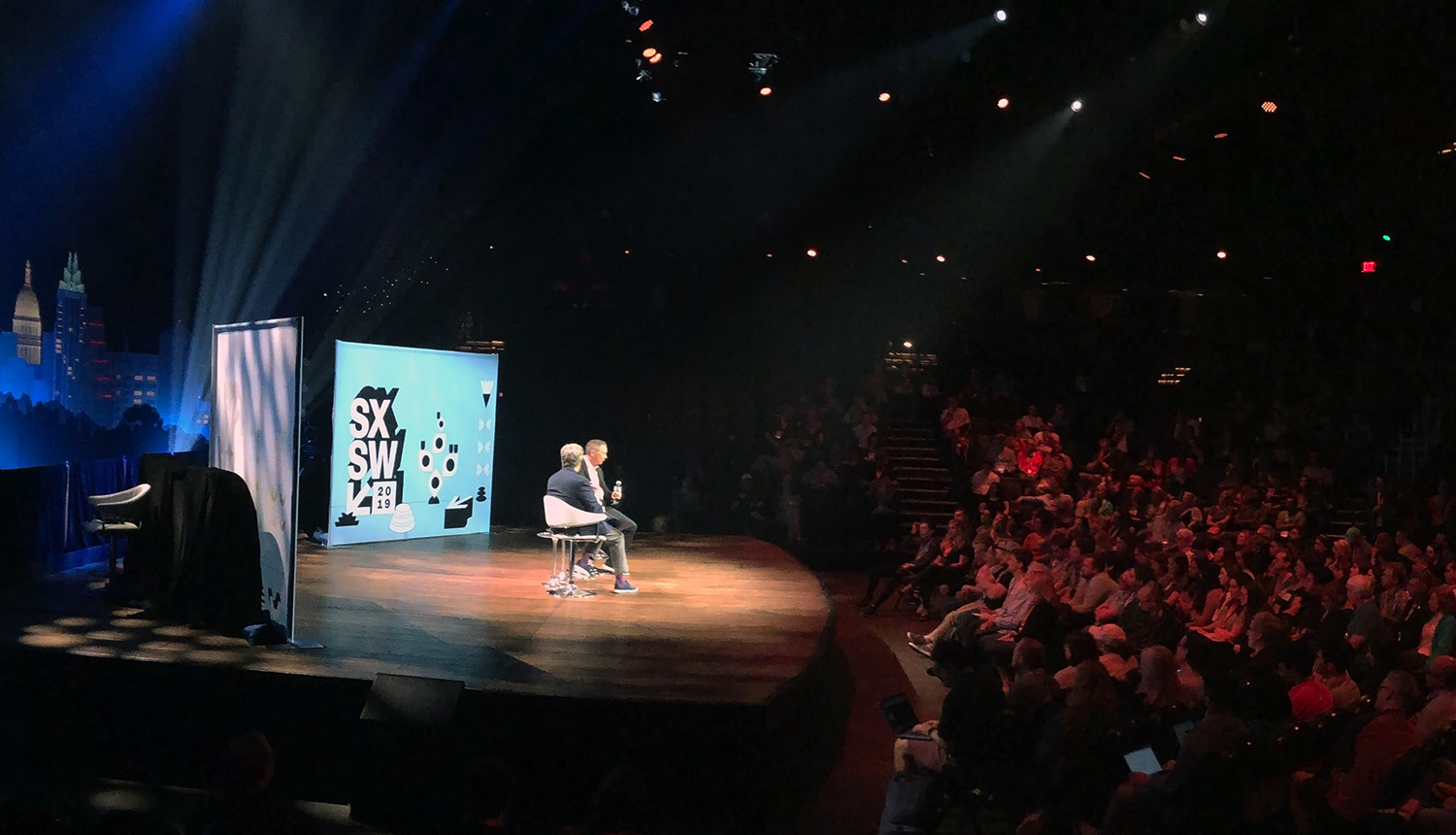 Posted at 01:09h in Trend Watching by Heather Lauer

I’m currently in Austin, Texas for SXSW Interactive. I last attended 7 years ago and was so turned off by the overwhelming size and scope of the event – and the corresponding lines to get into everything – that I swore I wouldn’t attend again. As I’ve returned to the consulting world over the last year, I’ve decided I should occasionally attend events like this to track general trends that I can incorporate into long term thinking and planning for my clients. Fortunately, a friend of mine recently moved to Austin, giving me another reason to make the trek to the Lone Star State.

So here I am, giving SXSW another shot. In this space, I’ll provide a daily wrap-up of what I observe and learn.

The best way to approach SXSW is to 1) manage expectations and 2) identify 3-5 things to accomplish each day and make that your focus. SXSW is spread across multiple venues that can be several blocks apart, and many sessions have a line that starts to form 30 minutes (or more) in advance. This set-up creates a challenge because you can end up missing sessions while you’re running around downtown Austin. When possible, planning to attend back-to-back sessions at the same venue helps to cut down on some of the stress due to logistics.

As with most big conferences, another challenge is identifying those sessions that will tell me something I don’t already know. Many panels feel more like a promotional session for the sponsoring organization or regurgitation of a case study that I could read online. I started tracking the SXSW schedule a couple weeks before arriving in Austin so I wasn’t just starting to figure it out once I was on the ground.

In between the first two panels of the morning, I dropped by the ACLU display across the street from the convention center. The ACLU has a large presence and activation at SXSW this year. They are focused on voter education around a few key issues including mass incarceration, voting rights and reproductive rights. Whenever an advocacy organization has a presence at an event like this, I like to wander through their exhibit to see what I can learn and apply to the campaigns I’m managing.

One of the more thought provoking sessions I attended on this first day was about the intersection of technology and populism. Hillary Clinton’s 2016 campaign manager, Robby Mook, was particularly insightful. He talked about the double-edged sword that is targeting in digital advertising. Mook believes it’s great that we have the ability to deliver messages to people in such a targeted way, but the lack of transparency on digital platforms is a challenge – he’s clearly still feeling the sting from 2 years ago. Mook also had a message for 2020 candidates: “Driving message is hard. If you try to drive message the way we drove message in 2008 and 2012, you will fail.”

On my way to the next session, I rode a motorized scooter for the first time. I’ve spent a lot of time criticizing this rapidly growing industry, mostly because I think there are serious safety concerns and I also think it’s ridiculous that their equipment now litters public sidewalks across the country. With that said, easy access to the scooters really did make navigating the various SXSW venues a lot easier – what would have been a 15-20 minute walk in between sessions became a 5-10 minute scooter ride. But I do feel like I should have been wearing a helmet.

John Kasich took the stage for a mid-day event at the Moody Theater. He had a lot of things to say that resonated with me as a voter, but as a public affairs practitioner, I was particularly pleased to hear him talk about the importance of grassroots campaigns and that meaningful reform comes from the bottom up. Kasich was one of several national politicians who spoke at SXSW today – it continues to be an important stop on the campaign trail, particularly for aspiring presidential candidates.

Generally speaking, I feel like SXSW has become more political than I remember it being 7 years ago, but that’s also the world we now live in compared to a few years ago.

Yesterday I got pulled into more sessions focused on politics than I planned to attend at SXSW. So my goal for today was to attend sessions that were more focused on strategy and tactics.

I had mixed success.

I started the morning by going to a vegan brunch with the friends who are hosting me while I’m in town. The brunch, which was held at Austin Eastciders, featured food from Beyond Meat and JUST Egg. Despite my well-known history with bacon, I’m actually open to trying new things like this – I’m open to any food that is good food. They served breakfast tacos made with the plant-based egg product. With all the flavors that were incorporated into the taco, it was hard to tell how the egg tasted on its own. But overall the tacos were tasty.

After brunch, I headed toward the session venues, stopping along the way to try on sunglasses from Bose that have speakers and a microphone built into the frame. The sound quality was actually quite good, although I’m not sure it’s a viable option (yet) for someone like me who needs prescription lenses.

The first session I attended was focused on Gen Z’s involvement in politics. This actually wasn’t my first choice for a session during this time block – I had hoped to attend a session about the future of websites. But I arrived too late and the line was too long, so the Gen Z session was my backup option. Because of my goal of avoiding politics today, I went in with a bit of an attitude. But my attitude was quickly adjusted.

All the panelists were in their teens or early 20s, but two of them have already run for office. They brought serious experience to the discussion, and these weren’t just high school or college students who have had some success on social media. These are individuals who have real experience in the field, which is incredibly important for truly understanding politics. They also seem to fundamentally understand the importance of grassroots campaigns and using social media as a gateway to community organizing.

One of the observations that struck me was that members of Gen Z don’t remember 9/11 but they remember the Parkland shooting. Because of this reality and other things that have happened in our country over the past decade, they are more inclined to focus on domestic politics over international politics. This also explains some of the growing interest in socialism (even though not everyone agrees on what that means). There’s a general feeling that they don’t feel protected by older generations and need to take things into their own hands.

Last, the Gen Z panelists feel that because authenticity is so important to their generation, they are starting to have an influence on older generations who are feeling pressure to be more authentic online, especially in the political arena. Anyway, this was genuinely one of the more interesting Gen Z related discussions I’ve listened to in recent years, and I’m glad I ended up in this session unexpectedly.

Side note: The badges at SXSW are as large as any badge you would encounter at a run-of-the-mill conference. And they contain some sort of RFID tag or other scannable technology that seems to be difficult for phones to successfully scan at the entrance for each session. Why can’t the badges be smaller and easier to scan? Why hasn’t this been figured out in all the years that SXSW has been going on? Strange.

On to my next panel…I attended a discussion on building authentic social movements. This panel had OK discussion about tactics, but it was focused on social justice and there was strong political bias among the panelists. I honestly tuned out about halfway through the discussion. They did make a few good points, including that you can’t build an authentic movement that is only online – there has to be an offline community organizing component as well.

The last two sessions of the day ended up being more of what I hoped to accomplish today.

The first session was a 15 minute presentation by Harmony Leanna Eichsteadt on refocusing the conversation about ROI with regard to online communities. I will definitely use some of the points she made with my clients. I frequently find myself in conversations with public affairs clients who want to assign an ROI value to their advocate acquisition programs. I typically try to shift the discussion toward a focus on public policy objectives, long term issue education and mobilization, and building relationships with key constituencies over time. Harmony laid out some very good arguments for looking at return from online communities through a different lens.

After Harmony, Kiara Imani Williams, who is a lawyer with Fab Fit Fun, also gave an excellent 15 minute presentation focused on crisis management. She shared some very specific advice for managing the response to a crisis, tied it back to the need for ongoing brand management, and made the case for how a crisis can be an opportunity. I’ll be incorporating some of her advice into my thinking about digital reputation management for clients as well.

To end the day on a high note – although quite the opposite of my vegan start to the day – I enjoyed delicious beef brisket for dinner.

I started my final morning at Interactive in a session about VR/AR. I’m still not sure if/when this will be a technology that gets integrated into politics and public affairs campaigns – maybe virtual or augmented campaign rallies and meet ups are in our future, but probably not any time soon. However, it’s a topic that intrigues me. The panelists presented a good overview of the current state – and future – of this technology, which was also described as “realism redefined.” Two keys to its future, as identified by the panelists, are experiences that users will actually use and rollout of 5G. There was also some good discussion around the digital divide implications of VR/AR technology.

The other notable session I attended on my third day at SXSW was called “Remote Entrepreneurship in the Digital World.” While it was framed as a panel on entrepreneurship, location independence and working remotely, it was really a conversation about viewing success as a journey, working smarter and building confidence through experiences. I don’t remember what most of the panelists do for a living, but their thoughts and experiences with building professional and personal lives based on what they want – and not based on what others expect – really resonated with me. It was great to hear from other independent professionals who share a similar philosophy about work/life balance, and this was one of the more inspiring hours I spent in Austin.

In summary, I have mixed feelings about the quality and nature of the content I consumed at SXSW – my impressions were similar to what I experienced 7 years ago. And the lines still suck. But I enjoy taking time to focus on learning and thinking at events like this once or twice per year. I’m feeling recharged and ready to tackle new challenges and opportunities.